Lower Saxony is Germany's second-largest federal state in terms of its area and its fourth biggest population-wise, with some eight million inhabitants. The fall of the Berlin Wall in 1989 saw Lower Saxony take centre stage at the heart of Europe. Its outstanding infrastructure of road and rail links and waterways makes for extremely rapid connections to both domestic and international markets and forms a pivotal transport hub for trans-European goods flow. Lower Saxony's sea ports are the gateway to America, the Far East and the rest of the world. The JadeWeserPort – Germany's only deep-water port – is currently under construction at Wilhelmshaven and will provide a vital new focal point for trade and industry.

Germany is among Europe's leading locations for the vehicle construction and technology industry. The world's largest and most beautiful cruise ships are built here; components for the world's biggest airliner, the A380, are produced here; and Volkswagen, Europe's leading automaker, has its base here as well. The Wolfsburg-Hannover-Brunswick economic area is one of Europe's leading regions in terms of its clustering of expertise in the auto industry. Braunschweig-Wolfsburg Research Airport is, after Toulouse, Europe's most important research centre specializing in traffic control systems and air safety. CFK-Valley Stade is home to concentrated German know-how in carbon fibre-reinforced plastics, materials which enable lighter, fuel-saving and lower-maintenance aircraft to be constructed.

Lower Saxony also heads the field when it comes to energy. Around one-third of Germany's oil and just over 90 % of its natural gas is produced here. Lower Saxony is Germany's frontrunner in renewable energies such as wind power, and as a region for biogas. It intends to further consolidate this position by rigorously harnessing offshore wind power.

A leading trade show location, Hannover enables local businesses to offer the latest technologies, products and system solutions virtually from their own doorstep at exhibitions of world renown. No other trade fair venue can boast such modern and ideal infrastructure. The best-known events, CeBIT and HANNOVER MESSE, symbolize what makes Germany so special as a business location and what is set to remain our hallmark into the future: they are synonymous with innovation, German engineering ingenuity and the effective marketing of what this country invents and produces. 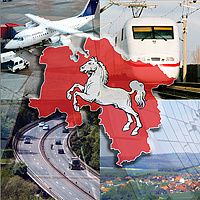