Overview of all exhibitions

The main exhibition Hanover's Rulers on the English Throne 1714-1837 in the Lower Saxony State Museum Hanover will present the history and cultural history of this personal union in a visitor and media-friendly way. The central theme of this exhibition, which is aimed at a broad public from both Germany and Great Britain, is the presentation of the intensive exchanges between London and Hanover that occurred in the most varied fields in the course of the 123-year period during which a single monarch ruled over two empires simultaneously. Outstanding exhibits from Lower Saxony, from German, British and international museums, and from private loans are complemented by attractive settings, as well as hands-on and multimedia stations. The rise of pomp and ceremony in the London court will be presented, as will the founding of the University of Göttingen, Georg Friedrich Handel's effect on the court of London and the influence of English fashion in Hanover.

The Palace of Herrenhausen

The second venue of the main exhibition Hanover's Rulers on the English Throne 1714-1837 takes place in the new museum of the reconstructed Palace of Herrenhausen. The exhibition will show an overview about the Guelph rulers and their residences and gardens and a cabinet of curiosities. It finally broaches the issue of art collecting from the 18th and 19th centuries focusing on the collection of Johann Ludwig of Wallmoden, an illegitimate son of George II. Highlight objects of this collection which in the meanwhile are dispersed all over the world are to be reunited in this venue.

The Royal State Coach is the centrepiece of the exhibition One carriage, two kingdoms: Hanover and Great Britain 1814-1837. This impressive coach, originally built for the Opening of Parliament ceremony in London, illustrates in a unique way the personal connection between Great Britain and Hanover. Furthermore, it stands as a symbol for the growth in importance of the State of Hanover in the concert of the German federal states and European powers.

The exhibition The house of Hanover and the time of the personal union as reflected in English caricature is dedicated to the history and stories of the Guelph rulers on the English throne, as told by the caricatures of the time, as well as their influence on political opinions. The exhibition is staged as if it were a play, and is set in various fictitious locations in London at the time of the personal union.

Residence Museum at the Ducal Palace of Celle

The exhibition Ways to power: playing the Great Gameis dedicated to the history preceding the personal union, focusing on the question of how an inheritance resulted in the descendants of Henry the Lion becoming the rulers of the British Empire for 123 years. The aim is to include basic questions about the concept of sovereignty and the transfer of power in the 17th and early 18th centuries. It was decided that the game would be an appropriate metaphor for illustrating this complex topic, in which rules, strategy and chance all play a role.

For 123 years, the Electorate of Hanover and the Kingdom of Great Britain were linked by a king. It was only when Queen Victoria succeeded to the throne of Great Britain in 1837 that the personal union was dissolved, since the rules of succession in Hanover did not allow for a female successor. From that time on, the two countries have gone their separate political ways. The Kingdom of Britain became a world power, whilst the Electorate of Hanover, which had been temporarily exalted to the rank of monarchy, went on to become a province of Prussia, later in 1946 becoming the greater part of the newly founded federal state of Lower Saxony, along with Oldenburg, Brunswick and Schaumburg-Lippe.

The marriage between Ernst August, Duke of Brunswick-Lüneburg and Sophie von der Pfalz paved the way for the house of Hanover to exercise previously inconceivable influence on the history of Europe or the world. Electress Sophie of Hanover, as the last surviving protestant grandchild of the Stuart king James I, was named as successor to the throne by the British Parliament in 1701 (Act of Settlement). After her death on 8th June 1714, the right of succession passed to her son, George Ludwig, who ascended to the British throne as George I just a few weeks later, following the death of Queen Anne.

With the coronation of the Elector of Hanover as King of Great Britain on 20th October 1714 in Westminster Abbey, the personal union became legally effective, and was passed on to George's rightful heirs, Kings George II to IV and William IV. The Kingdom of Britain and the Electorate of Hanover remained legally separate throughout the personal union, and were only united in the person of the monarch.

Yet as different as the two countries were with regard to their national constitution and their economic and social situations, many political influences and interdependencies arose during the personal union, which had an effect on the social development of Great Britain and Hanover and on the cultures of both countries. 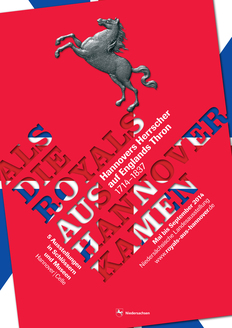