If you've yet to get acquainted with Lower Saxony, join us on a brief armchair tour through the state. Perhaps you're already familiar with our point of departure: the seven East Frisian islands of Borkum, Juist, Norderney, Baltrum, Langeoog, Spiekeroog and Wangerooge. Broad white beaches, the ebb and flow of the tides, sand dunes, and more hours of sunshine than anywhere else in the state.

Across from the islands lies East Frisia, known as "the land beyond the dyke", whose independence outlasted that of every other region in Lower Saxony. This is seafaring country and the hiding place of the notorious pirate Störtebaker; a region whose towns have a Dutch feel to them and where tea consumption is the highest in Germany.

To the south, the Emsland region extends down to the Dutch border, much of which was inaccessible only 100 years ago: the vast Bourtanger Moor was not drained until the mid-twentieth century.

The adjoining region, the Oldenburger Münsterland, has developed from impoverished farming country into a leading European stock-breeding centre - not far from Osnabrück, the city near Teutoburg Forest associated with the Treaty of Westphalia.

From the old principality of Schaumburg-Lippe, via Hamelin of Pied Piper fame, the hilly country of the Weserbergland extends as far as the town of Hannoversch Münden. The legends and stories surrounding the Weser, this fairy-tale German river, were recorded by the Brothers Grimm in Göttingen.

The stories in the Harz - Lower Saxony's mountain range whose silver mines formerly bestowed abundant wealth - are, however, about witches. Where German emperors once built an imperial palace, it is now half-timbered towns and enchanting woods that attract the tourists.

Today Lower Saxony's economic power is concentrated to the north of the Harz region, where five sizeable cities lie in close proximity: Hildesheim, whose churches feature on the World Cultural Heritage list; the still-young steel centre of Salzgitter; Hannover, which plays host to the largest trade fairs in the world; Wolfsburg, with Volkswagen's new "Autostadt" automotive theme park; and, right in the middle, Brunswick, the city with a high-tech tradition stretching back 250 years.

Still further north we find the Lüneburg Heath, named after the city of Lüneburg which owed its prosperity in the Middle Ages to salt. Discovered as a recreation area only 100 years ago, for a long time this heathland region lay off the beaten track near the border to the former East Germany; it has to this day remained sandy, idyllic and a haven of solitude.

In spring, apple trees in blossom attract hordes of visitors beyond the dyke of the Altes Land area just outside Hamburg. Here the so-called "Wet Triangle" begins: flat country between the estuaries of the Elbe and Weser, criss-crossed by peat bogs, home to the fishing town of Cuxhaven and the artists' colony of Worpswede.

The journey takes us via Bremen, a federal state in its own right (although enclosed by Lower Saxony), along the Weser and back to the university town of Oldenburg. The region of the same name extends from the Münsterland area to Wilhelmshaven, the state's largest port. Or, to be more precise: up to Wangerooge, the seventh of the "East Frisian" islands (although it has never actually belonged to East Frisia). 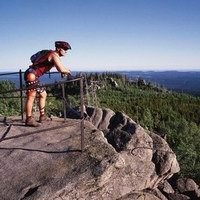