The judiciary in Lower Saxony

Some 1,900 judges work in the courts, which are divided into five different branches: those for ordinary jurisdiction, and industrial, administrative, social-welfare and fiscal tribunals. Verdicts are pronounced "in the name of the people"; in other words, the judges are, under the Constitution, independent in their rulings. Around 500 public prosecutors investigate suspected criminal offences in close collaboration with the police. The prosecuting authorities are impartial in their investigations, gathering both incriminating and exonerating material. The public prosecutors also act as prosecuting attorneys in criminal trials. Offenders are punished either by a fine or a custodial sentence. The maximum punishment is a custodial life sentence. After 15 years have been served, an official review is undertaken to determine whether continued detention is necessary. On average, persons sentenced to life imprisonment in Lower Saxony are released after 20 years (the national average being 18 years).

Lower Saxony's penal system employs 3,900 people, responsible for around 6,500 prisoners in 14 institutions. Before any convict is released, they are prepared for their return to freedom with a view to social rehabilitation. Lower Saxony's penal system endeavours to strike the right balance between ensuring the public's safety and former prisoners' reintegration within society, considering that "tomorrow they'll be our neighbours again".

The judiciary is, along with lawmaking (legislature) and administration (executive authority), the third fundamental pillar of our democratic system of government. The fundamental principle involved is the division of powers, i.e. each of these three institutions is independent of the others. 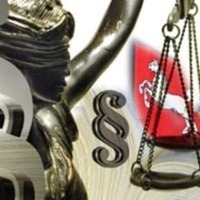